Poor attention distribution and how to avoid it using SCATT

Here is a vivid example of poor attention distribution just before the shot release. Check out what SCATT can show you!
⠀
This error occurs when the shooter briefly switches his attention focus from the sights to the target or the trigger processing. This mistake can be identified by the presence of almost straight fragments on the trace line, which is the uncontrolled movement of the gun relative to the centered hold zone. As a result you have a misplacement of the shot hole relative to the previous hold area. In Figure 1 we can evidently see that the shooter’s attention was distracted from a careful hold of the gun at the moment of the shot.
⠀
Now let's move to the Distance graph. In figure 1 you can see that roughly 0.2 seconds before the shot is taken, the graph goes up noticeably higher than in previous fluctuations, meaning that the shooter's aimpoint which correlates with a physiological reaction time of an average human being. While taking aim a shooter, with all necessary adjustments in mind, commits to a decision to finally pull the trigger.
⠀
This is one of the cornerstone issues the shooting sport and can be encountered by any shooter - from beginners to champions. The key problem here is that the shooter loses his/her control over the hold in the most crucial timeframe.
⠀
Check out how a proper trace should look like when you take a technically correct shot (Figure 2). The shot hole doesn't deviate from the general hold area and can be found really close to the AAP (Average Aiming Point - that purple crosshair in the 10-ring). The distance graph shows a pattern that almost rests on the horizontal axis, while fluctuations remain stable throughout the aiming-phase or actually descend as the graph approaches right before the 0.0-time mark on the time axis (horizontal). Everything indicates that the shooter here is in full control of his/her gun during the last fraction of a second. 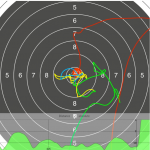 Can the Distance Graph displayed as you show it in Fig.1 or 2? I "assume" its overlayed the target somewhat.
OP

ptf18 said:
Can the Distance Graph displayed as you show it in Fig.1 or 2? I "assume" its overlayed the target somewhat.
Click to expand...

If I remember correctly from another thread, you practice with SCATT Pro, right?
Well, this particular graph UI (the overlay as well as the coloring) is available only in SCATT Expert.
Thus, only users with SCATT MX-02 and MX-W2 have access to this overlay
You must log in or register to reply here.
Share:
Facebook Twitter Reddit Pinterest Tumblr WhatsApp Email Link
Top