As many 10m shooters know, electronic targets do much more than simply replacing paper ones. They also introduce a quite different visual aspect of the target because they are often encased in a very bright square box. Hence the visual contrast vs. the environment is much stronger to the eye. As a pistol shooter I can perceive that the visual alignment of my sights seem quite different and I need to re-adjust them specifically. It is comparable to the sunny vs. cloudy daylight difference at 25m or 50m pistol outside ranges.
Therefore I decided to make my own electronic-like target to stay trained during confinement. 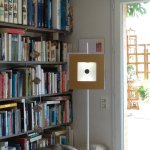 It is made out of cardboard box pieces, folden and glued together. I got the dimensions from the SIUS website (an electronic targets manufacturer) and the ISSF rulebook. The inside of my target box is covered with glued aluminium foil that helps concentrate a (more or less) uniform light from two small camping led-lamps. 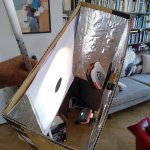 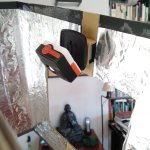 It is mounted on a pole that's actually a steel curtain rod, with a stand out of wooden cleat. The pole has graduations such that I can move the target up or down as I set it closer or further. All I need in addition is to glue or tape a newly resized printed target when changing the distance.
(if you noticed that the wooden mounting is uselessly complicated, that's because I wanted to user left-over pieces of wood instead of cutting any new ones)

Down is how it looks at night. Compare with the first top picture which was in mid-day. In both cases you easily see the sharp contrast between the bullseye and the white surface around.
(On this picture you can also see my previous paper target on the left, stuck to a bookshelf)

My Scatt MX-W2 calibrates immediately on this target day or night, as would most Scatt sensors I suppose. And that is with only two tiny lamps, USB rechargeable, less than 10€ each and for sure less than 10 lumens of light. Thanks to the reflective surfaces, that is enough to create the 1000 lux brightness that the Scatt needs to detect the bullseye.

More generally, I think it does well illustrate what the Scatt sensor needs to best detect the target and calibrate on it: a sharp contrast around the bullseye and the surface closely around it. This is why Scatt recommendations are to avoid excessively lighting the room and area around the target, because that reduces the contrast. This example shows that you can create a sufficient contrast with very very little light. Notice that a custom-made doesn't have to be as "sophisticated" as mine: I had the additional constraint of moving it easily and fast as it sits in a living room.

This experiment also demonstrates that you should not need to spend any money on setting up your custom shooting stand and lighting it up enough for a Scatt, but rather find easy ways to focus light from cheap everyday lamps. Paper or cardboard and kitchen aluminium foil are all you need for that.