Drifting hold area and how to spot it

Let's look into a very common mistake - a wrong hold zone. Even though the overall processing of each individual shot may look more or less technically correct, the general hold zone is off-center resulting in missed points.

The error is observed when the shooter fails to properly or fully coordinating the position of the front sight to the rear sight, or the shooter is not accurately or consistently positioning the head in relation to the sight.

Check out how a proper trace should look like when you take a technically correct shot (figure 2). 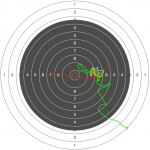 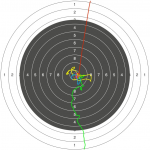 Off centre hold can also be due to incorrect or lack of attention to calibration and zeroing the rifle. There is a simple trick to speed up the calibration and zeroing:
After the calibration shot, come on aim and hold it for a few seconds. Instead of firing a sighting shot, take another breath and, while doing so, look at and make a note of where the aim settled. Do this 4 or 5 times before firing the first sighting shot. Once you have fired the first sighting shot, adjust the zero not on your sights, but by dragging the shot hole in a direction and by the appropriate distance that would move the centre of your aim points (from the non-firing shots) into the centre of the bull. On your next sighting shot the aim point should be very close to the middle. One or two more sighting shots should be sufficient to confirm the accurately aligned zero.
You must log in or register to reply here.
Share:
Facebook Twitter Reddit Pinterest Tumblr WhatsApp Email Link
Top